Canaan in the Desert, an amazing gift from our almighty and loving God!

Excerpts from the Book: REALITIES IN THE DESERT – 40 Years of the Heavenly Father’s Loving Care 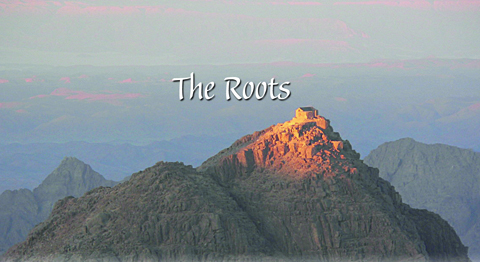 “Why did you Sisters come to America?” The answer is not so straightforward. To begin, we must go to Mount Sinai.

But what does this mountain in Egypt have to do with a piece of property on 40th Street in Phoenix, Arizona? A lot, because the roots of Canaan in the Desert reach down to the place where God made a covenant of love with man.

In the early 1960s, Mother Basilea perceived the enormous spiritual shift that was taking place in our Western society. It caused her deep anguish. She wrote, “In the past, God’s commandments were widely recognized as moral standards and were a dam against unrestrained immorality. Today we find that this dam has collapsed in most places. More and more, all nations are becoming subject to the same spirit, the spirit of lawlessness.”
She challenged Christians to rebuild the dam against this continuing “moral landslide” which, like an avalanche, would bury many lives and ultimately whole nations under it. Today it is evident how prophetic her deep concerns were.

In the fall of 1963, following God’s leading, Mother Basilea traveled to Mount Sinai, then a forsaken and almost inaccessible place. Here God revealed to her the glory of His commandments.

She wrote, “Even though these commandments of God were so familiar to me, they now cut me to the quick, as if I were reading them for the first time…. He filled me with the spirit of love and compassion for the nations of the world which are facing collapse as the result of their disobedience to God’s commandments.” 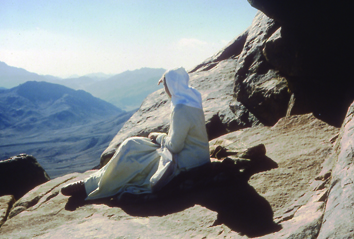 Mother Basilea at the summit of Mt. Sinai

Mother Basilea’s heart burned that these commandments – given to mankind as lifelines to save us from disaster (see Deuteronomy 30:15-19) – be thrown out to the nations again.

So she was willing to take the first painful step, sending some of her spiritual daughters out into foreign countries. Small “islands of light” were to be established in various countries. They would be signposts of God’s love and faithfulness in a world threatened by destruction. There the validity and the blessings of His commandments would be demonstrated. 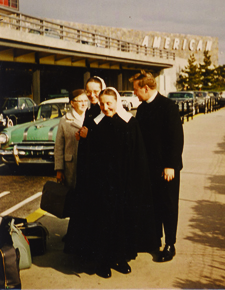 In 1964, Mother Basilea made an extended speaking tour throughout the United States. In her book-hard cover, Sown in Weakness, Raised in Glory, a chapter describes her difficult yet ground-breaking trip.

Following her visit to California, Pastor Larry C.  of a Lutheran Church in San  Pedro asked our Mothers to send two Sisters to his parish. Under his kind guidance, Sister Lucia and Sister Judith spent a most valuable year there which became a time of training.
Then in 1966, an elderly couple from Phoenix, Mr. and Mrs. St., visited our Mothers in Germany. They asked if a few of our Sisters would take over their property in Phoenix when they retired. Thus their spacious home could further be used for God’s work and become a permanent place for Canaan’s ministry. As a start, they offered two small duplexes on their property at 32nd Street and Camelback. 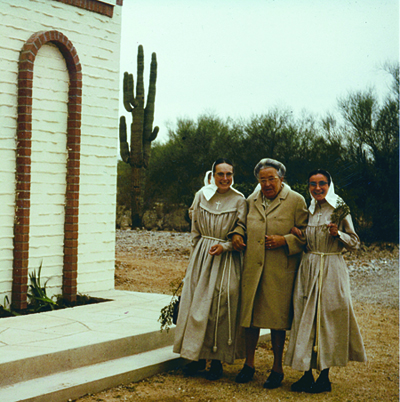 Phoenix? We had to use a map to find it! None of us had ever heard of a city by that name. Our Mothers prayed about this possibility. They asked friends, including  Corrie ten Boom, for their advice and received positive answers.

So it was God who, in His wisdom, led us to this rapidly growing city, unknown to us and yet ideally located for a ministry that would reach out to the whole country. As Isaiah says, “All this also comes from the Lord Almighty, wonderful in counsel and magnificent in wisdom” (Isaiah 28:29 NIV). Today, when we look back, we see more and more clearly how wonderful His counsel is. Canaan in the Desert, however, was not yet in sight.
Sister Rebekka

In April 1967, Sister Lucia and I moved to Phoenix and we began renovating the two duplexes which the couple had offered us. For several weeks we worked hard, often into the night, supported by new friends including  Pastor E.H. and R. Z., Rector of a large Episcopal Church. Soon the buildings were so improved that we made plans to invite guests  for our first retreat.

Suddenly everything changed! Neighbors complained about “zoning laws” and our having a “soup kitchen.” Sister Lucia went to one neighbor innocently assuring him we didn’t eat only soup. We ate meat and vegetables too! Upon hearing this account  our Pastor  laughed and explained our neighbor’s real objection. Zoning laws couldn’t be changed. We might have to leave. We were heartbroken! Hadn’t God led us here? What about all our hard work? What would our new friends say?

Our friends and we Sisters stormed heaven. We asked everyone in the Motherhouse in Germany, especially our dear Mothers, to pray that the hearts of our neighbors would be changed. Our Mothers’ reply took us by surprise. They gently, but firmly, reminded us that Canaan should be a little foretaste of heaven where peace and reconciliation reign. If our neighbors were so opposed to our presence, we were the ones who should yield. They included a line from one of Mother Basilea’s songs which greatly comforted us:
“Wo Er zerstört, da baut Er auf (Whenever God destroys, He builds anew).”

Our dear American friends received the decision as coming from the Lord. One who had worked especially hard even sent us a donation. Later he became the architect of Canaan in the Desert.

We foolishly thought our neighbors had ruined everything. But oh, how good our Heavenly Father is! He wanted to give us a piece of land nestled at the foothills of a mountain preserve with generous space for a beautiful Prayer Garden open to all.

On the morning of our last Bible study at 32nd and Camelback, we announced with heavy hearts that we had to leave and did not yet know where to go. A lady, attending for the first time, spoke up. She had been busy ironing that morning when the desire to attend became so strong that she grabbed her Bible and rushed right over. Had an angel nudged her? Spontaneously she invited us to move into her family’s guest house, not far away. Rejoicing we moved on December 12, 1967. 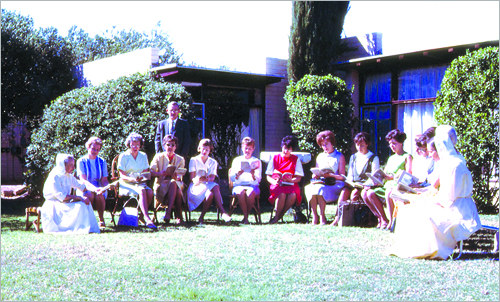 Finally – Canaan in the Desert 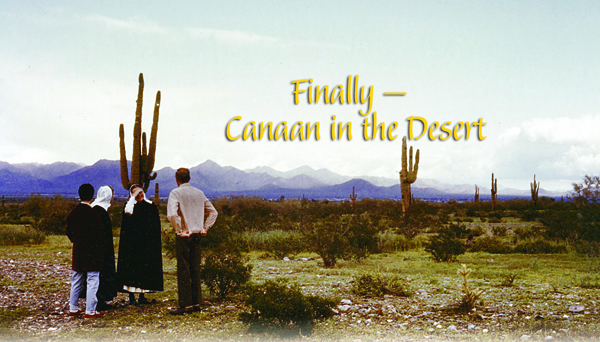 It took nearly five painful months (1967-1968) to find God’s place for our future ministry. Sister Lucia and I continually prayed and searched. A kind realtor helped us to look for places which might be suitable. At first there seemed to be a lot of possibilities, but each fell through. For instance, we toured a property with a price we thought reasonable, but the odors emanating from the horse farm next door would certainly deter future guests. Another property that appealed to us included a swimming pool which did not seem quite right either.

Then I thought I had found my dream place – a building with four wings. I even envisioned how each wing could be used: one for Sisters, one for guests, one for workrooms, and one for the chapel. This must be God-given!  However, Mother Basilea, who at that time was visiting us in Phoenix for ten precious days, sensed the Lord’s disapproval. I was convinced this was the only time Mother Basilea had not heard right. Not long afterwards, however, we learned that this beautiful building was termite-infested and had to be pulled down!

We have learned that when the Lord wants to do something decisive for His Kingdom, He often applies the law of the grain of wheat which first has to fall to the ground and die. I remember how Mother Basilea prayed with us that the Lord would show us what stood in the way. In His love, He answered this request, and we understood what was not pleasing to Him. Then He gave Mother Basilea a new idea: not to look for a building, but for a vacant piece of land, just as our Motherhouse had started on an empty piece of land. There we could build our Sisters’ house and a retreat house.

Our realtor began to look for a property in South Phoenix, which was just being developed – but the land was too expensive. Then he looked in North Phoenix which was mainly untouched desert and found a five acre lot. Mother Basilea and we two Sisters went to look at it. We liked it very much, but we needed a larger place.

So our realtor approached the owner of the adjacent property, asking the lady if she would consider selling some of her land. She had no intention of doing so, she said, because it was going to her children and grandchildren. She had turned down many similar approaches in the past 20 years. When the realtor mentioned that he had come on behalf of “Sisters,” something miraculous happened.

Suddenly the lady, “Nana” as we later called her, was very interested! She shared that she had seen three Sisters looking at her property and recalled the Lord saying to her, “If ever you sell your land, sell it to Sisters for a convent and a retreat house.” The realtor became excited, “It’s for those Sisters that I’m here!” When he added, a bit cautiously, “I know they can only make a small down payment. Can they slowly pay off the remainder?” Nana immediately offered to sell without interest! She said, “Whenever the Sisters are able to pay off the land is fine.”

Our hearts were filled with awe and thanksgiving  to the Lord. Quickly we arranged to sign the contract. That was the unforgettable date of March 15, 1968. Mother Basilea celebrated this great day with us. She was the happiest of all. God had again shown who He is. After He destroys – destroying also what may not be right in our lives – He rebuilds. Yes, He gives us something much better! “Expect it!” she said to us. 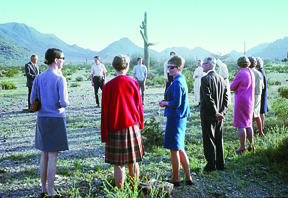 We are in awe when we think how God gave us Canaan at $4,200 per acre! At today’s prices even a small portion of this property would be beyond our means.

In those days you saw ten acres of almost untouched desert nestled against a backdrop of Sonoran Desert Mountains. The neighboring houses were hardly visible.

This is the unique area where God chose to plant a little Canaan in the Desert with a Garden of Jesus’ Sufferings and His Resurrection!

Canaan in the Desert, this amazing gift from our almighty and loving Father, is the focal point of this book. March 15, 2008, marked the 40th anniversary of the day when God entrusted to us this piece of land. 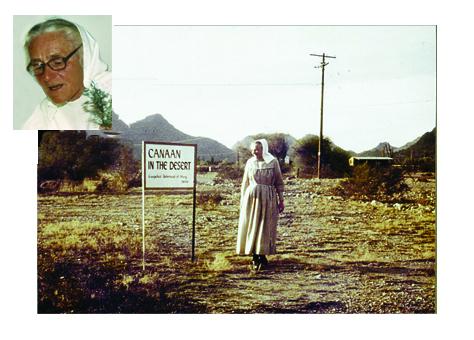